I spent last weekend in toasty Tucson, AZ at the Alliance for Massage Therapy Education annual meeting, and for the third year in a row since this organization started, it was one of the best things I have ever attended. There were quite a few new people attending this year, and attendance was up slightly from last year. The meeting was held at the El Conquistador resort, a beautiful venue with gorgeous mountain and desert views.  I was late getting there and unfortunately missed the opening ceremony and the keynote presentation by Benny Vaughn, which I heard was fantastic.

As usual, there were great continuing education offerings…I attended Tracy Walton’s class on “Busting Myths and Critical Thinking Skills,” which was informative and entertaining, and I heard nothing but praise from attendees of the other classes, which included offerings by Stephanie Beck, Martha Brown Menard, Susan Beam, Cherie Sohnen-Moe, Terrie Yardly-Nohr, Nancy Dail, Pat Benjamin, and Ben Benjamin. Bear in mind, these classes aren’t your average CE class–they are directed at massage therapy educators. When these great teachers weren’t teaching a class, they could be found attending someone else’s class. That is one of the most wonderful things about this gathering to me; it is attended by some of the most well-respected and well-known educators in this profession–and they all have the attitude that they’re not finished learning. Kudos to every one of them.

Nancy Dail organized a “Meet the Authors” gathering, and it was amazing. I was humbled to be included in such awesome company. 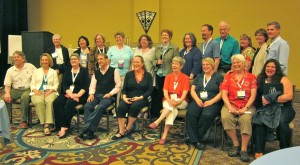 I doubt if I can name all these people   in the correct order in the picture so I won’t even try. Mark Beck was out of the room when the picture was taken but he was present as well. The group included (in alphabetical order) Timothy Agnew, Sandra K. Anderson, Pat Archer, Ben Benjamin, Pat Benjamin, Andrew Biel, Celia Bucci, Iris Burman, Nancy Dail, Sandy Fritz, Julie Goodwin, Martha Menard-Brown, Carole Osborne, David Palmer, Cherie Sohnen-Moe, Ralph Stephens, Tracy Walton, and Terrie Yardley-Nohr. Also absent was David Lauterstein, who had an airline travel nightmare, but his book was present along with the others authored by these amazing people. I don’t know when I have ever seen such talent present in one room.

All the major organizations had representatives in attendance, with the exception of ABMP. I’m not sure if they were making a statement by not showing up or not. I had actually spoken to Bob Benson, the Chairman of ABMP, a few days before the meeting and asked him if they would be in attendance, and he did not make any mention of political reasons for staying away…of the likely candidates that would have attended, several were on vacation, one was attending a family wedding and so forth. Still, their absence was notable, no matter what the reason. AMTA, the FSMTB, and COMTA were all in attendance. There was also chair massage offered at the meeting to benefit the Massage Therapy Foundation, and thanks to the efforts of Taya Countryman who organized that effort, over $900 was raised for the Foundation.

Elections were held, and the standing officers were all re-elected. Two new board seats were also added. The AFMTE Board has let go of their management company and are handling it themselves, and the two new board members are needed to help with the many tasks of the organization. Stephanie Beck and Heather Piper were elected as members-at-large.  I agreed to serve on the marketing committee….I don’t do boards anymore of any kind, since that would interfere with my blogging, or at least the perception thereof, but I’m glad to serve the organization on this committee.

Breakout sessions were held to discuss numerous topics of interest to educators, including all the various projects that are going on at the moment, not the least of which is the Teacher Education Standards Project. Other breakout sessions were to talk about the MOCC proposal from the FSMTB, the new policies announced by the NCBTMB, and other issues facing the profession.  There weren’t any formal votes in any of the discussions I sat in on, but a number of people I talked to all said the same thing–that there are a lot of duplicated efforts going on, which is a waste of time and resources. John Weeks, Executive Director of ACCAHC, also gave a keynote address where he stated that we have a tendency to get ourselves trapped in whirlpools–and how much influence we could have because of our sheer numbers, if we would just get out of them.

During the business meeting, President Pete Whitridge announced that the organization has no debt. That’s a fabulous position to be in, but I would like to state that we need and welcome corporate sponsors, as well as individual members. The Alliance has worked very hard to keep membership fees reasonable–and to hold our meetings in reasonable places. Although the El Conquistador is the lap of luxury and a beautiful place, we got a room rate of $99 per night. Many meals were provided as well, so financially, it’s a bargain to join. Please visit the AFMTE website to find out about the many benefits available to you as a member. There are also vendor opportunities and sponsorship opportunities at the annual meeting. Thanks to exhibitors Biotone, Bon Vital, Books of Discovery, the Center for Embodied Teacher Education, F.A. Davis, the International Association of Massage Business, Massage Envy, the Massage Therapy Foundation, Massamio, the National Accrediting Commission of Career Arts & Sciences, Performance Health/Biofreeze, Wellx, and Wolters Kluwer Lippincott Williams & Wilkins. Thanks also to sponsors of the meeting, Massage Today, Massage Magazine Insurance Plus, the Florida State Massage Therapy Associaton, Massage Envy, Books of Discovery, Pearson, Biofreeze, and SOAP Vault. Soothing Touch , Oakworks, and Massage Warehouse, along with many others also donated door and raffle prizes.

On a personal note, I had a big fat time socializing with so many friends and making a few new ones. I had dinner the first night with Julie Onofrio, Kathleen Gramzay, and Karen Hobson. I met with Mike Noble, the new acquisitions editor at Lippincott, and Shauna Kelley, their marketing manager, for dinner on Friday night to discuss a couple of projects, and Saturday night, I had a blast with the team from Massamio and a bunch of other friends–both FB friends and the real variety. I went to lunch one day with Allissa Haines and Gregory Hurd…we went sneaking out to the In-and-Out-Burger for a junk food fix. I spent a couple of hours talking with Ryan Hoyme (aka The MassageNerd), and just in general enjoyed myself and enjoyed seeing everyone. I tried to sit with someone different at every meal and every class so I could visit with as many people as possible, and wish I could have personally talked to everyone there. I did have a few good but short conversations, with Sandy Fritz, Sue Toscano, Susan Beck, Mark Beck, and other good folks. As usual, there just weren’t enough hours in the day.

The biggest thanks, and deservedly so, goes to Cherie Sohnen-Moe. Tucson is Cherie’s home town, and she really went over and beyond the call of duty in helping to organize the event. She’s probably ready for a vacation!

I urge you to join the Alliance for Massage Therapy Education. We are hoping to accomplish some great things, and we need your expertise and your input. We are a non-profit organization and of course donations are welcomed, but what we’d really like is your membership fee–AND your participation. We want and appreciate active members! There are a lot of things going on in our profession right now, as I have reported right here. We need to be sure that education evolves in a way that serves the highest good of the profession, in total transparency, and that our membership gets plenty of input. That’s one thing that is very evident about this group of people–they do want to hear what the members think….and here we have some of the best and brightest minds in the business. You could almost get star-struck at this meeting–but there is not a standoffish person in the bunch. Don’t wait until the next meeting; join us now, and get involved. If you are an educator, school owner, administrator, or industry partner, we need you. And I’m going to shamelessly use the same quote that I used from Jan Schwartz at last year’s meeting: “If you’re not at the table,  you’re on the menu.”

7 Replies to “Report from the AFMTE Annual Meeting”