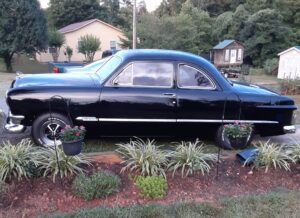 This fine-looking 1950 Ford Coupe belongs to my husband, James. It was his father’s. He and his brother restored it to the perfect specimen that it is now. It’s beautiful. We just put insurance and tag on it a few days ago. We built a new garage for it, too.

Two years ago, when the world turned upside down with COVID, all the massage conventions and live classes were canceled. It seems that COVID is going to stay with us for a while longer–maybe forever–but life goes on.  I’m vaxxed and boosted. That’s not a guarantee of staying free of COVID, but it makes me feel somewhat better about the risk of getting a severe case.

I ventured out to teach my first live class since 2020 a couple of months ago for the South Carolina Chapter of AMTA. Next week, I’m heading to the World Massage Festival in Cherokee, NC, to teach four classes, hang around the CryoDerm booth when I can, and reconnect with my tribe. It’s good to be on the road again, seeing massage therapists from near and far.

On the other hand, these two years of staying home have been a wonderful blessing. I’m fortunate that I have been working at home since 2015, when I accepted a job with Soothing Touch. They are located in New Mexico, but allowed me to work remotely. I left there after three years and went to work for CryoDerm. CryoDerm is located in Florida, and they also allow me to work from home.

James and I both stay busy. We both always have some kind of project to work on. We do projects together, too, usually involving woodworking. I’m handy with a Dremel and using the torch to burn wood. My husband is the gardener in our family.  Sometimes he trusts me to do the watering; that’s brave on his part, since I could kill a silk flower! 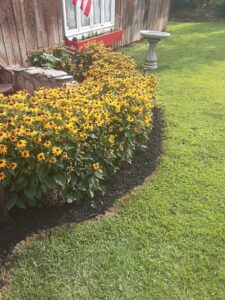 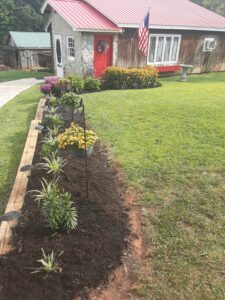 It will be good to see the family of hands again (that’s what I’ve always called the Festival). We’ve got another trip planned to meet up with friends in Tennessee in September. Sometime this winter, we’ll head down to see my family in Florida. And next year, hopefully we can return to Ireland. I’ve visited Ireland  every year for years, until COVID came along. James made his first trip with me in 2019, and we had no idea we wouldn’t be able to go in 2020, or 2021, or this year. While the numbers have gone down in my home state of North Carolina, they’re rising again in Ireland, so we’ll wait another year and see what happens.

No one knows what the future may hold. We will take it in stride, whatever it is. We’ll enjoy sitting on the porch with our dogs, watching the garden grow, and playing music together in the evenings.  And we’ll enjoy our rides through the countryside (the kind with no real destination in mind) in the Ford.

I wish everyone health and happiness. May your blessings be many and your troubles be few.

Champ and I spent last week in Las Vegas at the World Massage Festival. This was our fifth year there, and the biggest and best one yet. Almost 700 people at this one…9 years ago when Mike Hinkle started the Festival, 20 people were in attendance.There were people from every state and 7 or 8 foreign countries. A whole contingent came from Trinidad.

The World Massage Festival is a unique event. Mike and Cindy bend over backwards to make the Festival affordable to everyone. Instead of a $189 hotel, we were in the Tuscany, an all-suite hotel, for the magnificent price of $59. And they are nice rooms! The staff at the Tuscany was very nice and helpful, the food was good, and in general it was just a good experience to stay there.

Over $50,000 in door prizes and scholarships were given away. I got to do a lot of the name-drawing and I had some real fun helping make people’s day with cash prizes, diamond jewelry, and other goodies.

On opening night, I was the keynote speaker. It was a humbling experience to look out at the room and see so many dedicated colleagues, many of whom have been doing massage for many more years than I have. During the awards ceremony, Irene Smith was honored with the Lifetime Achievement Award. I have to confess that I was not familiar with her work until Sunday night. She started the first project in the US to massage AIDS patients and has been doing Hospice work since the 1970s. Her entire career has been based on selfless giving. She is an example of the finest massage has to offer.

Since the beginning, one of the purposes of the Festival has been to recognize those who have made significant contributions to massage, through the Hall of Fame. Judi Calvert is always the host for this occasion and as usual did a beautiful job. I spent some time talking with several of this year’s inductees, all genuinely nice people who leave their ego at the door in spite of some of their amazing accomplishments. I spent an hour visiting with Mark Beck, who wrote the textbook I learned from in massage school, which was a real treat for me.

Lots of friends were in attendance at karaoke night, and we have got some talented singers in massage therapy. People had a blast singing and dancing.

Quality education, as always, was a highlight of the Festival. Champ took a class in Thai Massage from Mukti Michael Buck and really enjoyed it. I taught two classes, participated on a student panel, helped out with registration and karaoke night, and kept busy visiting with people. Glad to see Allissa Haines, Andrea Lipomi, Ryan Hoyme, Jake Flatt, Gina Smith, Thomas Liberto, Vivian Madison-Mahoney, Enid Whittaker, Michael McGillicuddy, Cherie Sohnen-Moe, Leena Guptha, and so many more. The WMF is always like a family reunion. I also got some great bodywork from Karen Kowal. Darcy Neibaur raised over $2000 in the Sweet Serenity booth to benefit the Greenville SC Shriner’s Children’s Hospital.

I also enjoyed having Sally Hacking and Mary O’Reilly of the FSMTB come into my student class and answer questions about the MBLEx for students.

Pualani Gillespie took Champ and I out for a fabulous dinner at Mario Batali’s restaurant, Carnevino, and we had a great visit with her.

Next year, the tenth anniversary, is going to be held in Michigan City, Indiana, and I expect it to be even better. I appreciate Mike and Cindy and everything they do. I hope to see you there!